Along the beautiful Indian Ocean in Eastern Africa, lies Tanzania. With some of the most incredible beaches in the world, a wealth of natural wonders and a diverse array of wildlife, many flock to holiday here year-round. Where to Stay and What to Do

Tanzania hosts many larger populated cities as well as smaller tribal villages. Make sure that you are well versed on the specific culture of the area you are visiting and what accommodations they may have.

Dar Es Salaam is Tanzania's largest and wealthiest city. Nestled right along the coast of the Indian Ocean, you are sure to enjoy the fresh seafood and popular city life. With such a diverse population made up of Tanzanian Africans, Arabs, Asians, Germans, and British among others, you are sure to find cuisine to fit your taste. Dar Es Salaam is also home to two of the five museums making up the National Museum of Tanzania consortium. Another popular tourist attraction is the Safaris. Head out on a guided tour and take in the wildlife that populates the regions around Dar Es Salaam. After a long day chasing wildlife with your camera, you can relax on one of the many beaches surrounding Dar Es Salaam or grab a bite to eat at an one of the popular restaurants such as 305 Karafuu or Gourmet, with their 5 star ratings.

If oceanfront relaxation is what you're looking for then look no further. Zanzibar is surrounded with crystal blue water, white sandy beaches and the perfect amount of nature excursions. You can catch some sun on the many beaches such as Nugwi on the most northern point of the island and while you're there check out the Mnarani Marine Turtle Conservation Pond. This community-led NGO lets you see how the locals are working towards rehabilitation of the beautiful sea turtles populating the island area. And, if you are headed down to the south central point of the island, be sure to stop at the Zanzibar Butterfly Centre to watch beauty unfold.

When you're ready to do some historical sightings, you can catch a glimpse of how Arabian Royalty once lived at the Mtoni Palace Ruins, just a short drive outside of Zanzibar city. Another historic sight, in fact it is a UNESCO World Heritage Site, is Stone Town. Stone Town is the old part of Zanzibar City, housing architecture from the 19th century with influences from the Arab, Persian, Indian, and European cultures. Formerly the capital of Zanzibar Sultanate, this centre flourished in spice and slave trade in the 19th century. A notable place of interest may be the House of Wonders, once the Sultan's Palace and the first to have electricity in Zanzibar. After all of your excursions, don't forget to try out some local cuisine at Café at Emerson Spice and House of Spices, you'll be sure to understand why this was once a spice-trading focal point.

Undoubtedly one of the most popular attractions of Tanzania is the compelling beauty of Mount Kilimanjaro. Many come prepared with walking sticks, proper clothing and determination to reach the summit of the mountain. Others are happy with the footslopes containing vast array of wildlife such as elephants, leopards, and buffalo. The park contains many huts and campsites for an overnight stay to take in the breathtaking views under the stars. If being that close to nature isn't your idea, there are also many hotels in surrounding villages.

Other Tanzanian parks such as Saadani National Park and Serengeti National Park are perfect to see why people visit Tanzania and the African Continent. Safaris are wildly popular, as well as Game Drives. You can also camp out on the Nature reserves and become one with nature.

Take a trip from Mt. Kilimanjaro to the Ngorongoro Crater, another UNESCO World Heritage Site. The volcanic crater is the largest un-flooded and unbroken caldera in the world. After you've visited the crater you can hop over to the Maswa Game Reserve and Serengeti National Park, finishing your tour at Lake Victoria, one of the largest freshwater lakes in the world. There are many luxury lodges among the trail depending on how much time you would like to spend at each. 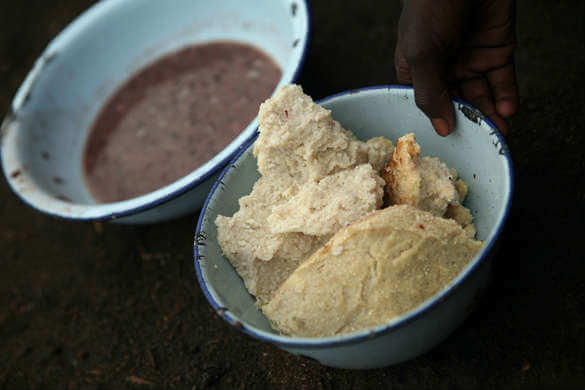 Although many restaurants have been named for the different areas of Tanzania, it is notable to add what you might find while you are there. While different regions will host different flavours and favourite dishes, there are a few that are popular to talk about. The most popular dish in Tanzania might be that of Ugali. Made of flour, maize and/or millet, it also usually includes Meat, beans, fish or cooked vegetables.

Another popular selection is that of Mtori, or cooked beef and bananas. Or if you're looking for a bit of spice and flavour, try the Pilau made of rice and seasoned with curry, cinnamon, cumin, hot peppers and cloves. When you're ready for a drink, try the traditional Chai Maziwa, or chai with milk. It is important to note that this is very sugary and may not sit well with foreign travellers.

It is also important to note that our stomachs may not be accustomed to the particular foods or preparation ways of Tanzania, especially when travelling to smaller villages. For a more enjoyable trip, always ensure that meat is cooked all the way through and before drinking local water make sure it has been filtered or boiled for 10 minutes before consumption.

Tanzania does not have distinctive seasons; there is only the wet season and the dry season. Make sure that you are planning to go during a time that will be pleasant. Keep in mind that Tanzania is close to the equator so it will be hot no matter what time of year. In the "seasons" there are the long rains and the short rains. It is notable to add that during the long rains many popular tourist attractions and lodging shut down and during dry season temperatures can soar over 35 degrees and become very hot, even by local standards.

Tanzania is made up of a dense Muslim-population; particularly Zanzibar, which is 99% Muslim. Due to the cultural influence it is important to maintain modesty and respect. Many of the tourist areas do so happen to be more acclimated with European and western attire.

The primary language in Tanzania is Swahili, or Kiswahili but many are well-versed in English as well.

The Tsh is the official currency of Tanzania and will be widely accepted in most of the country. Credit cards are mainly used only in hotels and large resorts. Tanzania is still primarily a cash-only society.

Before entering Tanzania there are many vaccinations that are required for travellers. You will need a Hepatitis A and B, Typhoid, Malaria, and Rabies Vaccinations. You will also need to get a Yellow Fever Vaccination with a certificate.

Finally, you must hold a visa to enter the country. In order to prevent a lengthy, potentially over-night wait, you will want to get it from the Tanzanian Embassy in Australia before your trip.

Regardless of where you decide to visit in Tanzania you are going to have the opportunity to meld the best of both holiday trips. You can go on safari adventures and relax on the beach; taking in multiple cultures in the same city. Be sure to purchase worldwide travel insurance from Cover-More Australia before you take off for Tanzania to keep yourself out of harm's way. If something unexpected does occur and you find yourself in need of help, all Cover-More policyholders have access to 24/7 Medical Emergency Assistance.