Volunteerism: A Report From Ethiopia

I've recently returned from Debre Birhan, Ethiopia – a small town about three hours outside of Addis Ababa – where I was leading a team of 12 volunteers as we built houses with the local community. It was my second trip to Ethiopia and my fifth trip as a volunteer to Africa with Habitat for Humanity.

They build "improved chikka houses" in Ethiopia – revised and strengthened versions of traditional houses using local materials. By adding a poured concrete foundation, plaster finish and a tin roof, the traditional stick and mud house turns into a stable structure that lasts for much longer, yet is still affordable.

Since the process of building a modified chikka house takes longer than the 5 days we were there, the build was structured to show us each phase of the process. For better or worse, that meant our first day was spent digging the foundation while we were still trying to get used to the altitude (2,800 metres). The good news about the alititude is no mosquitos, so no malaria. The bad news is it takes a few days to get acclimated - especially when you're engaged in physical labour that is generally not part of your daily routine (I don't often swing a pick axe at in my office!).

Luckily, the digging only lasted for the morning and then we were off to lunch made by the women of the local community. As we all sat down together for lunch that they shopped for at the market that morning, any lingering barriers melted away. We also got to expand our culinary experiences to include some delicious Ethiopian dishes.

In the afternoon we switched gears to tie sticks to the house frames. They use locally grown eucalyptus because it grows so straight and the bark is stripped off and soaked in water to use as ties. As the bark dries, it shrinks and makes an even tighter seal. Over the next few days, we carried rocks and sifted sand, carried and stomped dirt to make the floors level, and then it was time to throw the chikka.

Chikka is fermented mud and straw that is mixed together for several days and then scooped us and thrown at the frame of sticks. This is done both inside and outside – with a break in between to let it cure. A second, thinner layer is then added to smooth out the walls for finishing. This is my favorite part of building in Ethiopia. I love throwing mud – it's a great stress reliever. The only problem is we never have very many photos as everyone is too messy to grab a camera.

All too soon, the five days were up and it was time for our final dedication ceremony – when we put the final touches on a house, adding the final plaster and paint before it's turned over to the homeowner. It's always a bittersweet day – for the new homeowner, it's a life changing day. For us, it means we are on our way home soon. 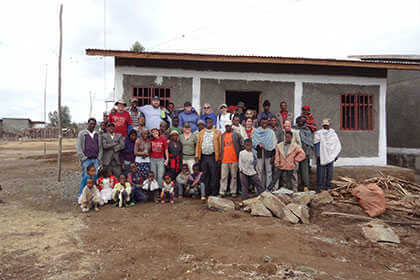 So, even as we rode on the bus ride back to Addis Ababa for a day of sightseeing before heading home, many of my teammates asked, "Where are we going next year?"

All images courtesy of Lisa King