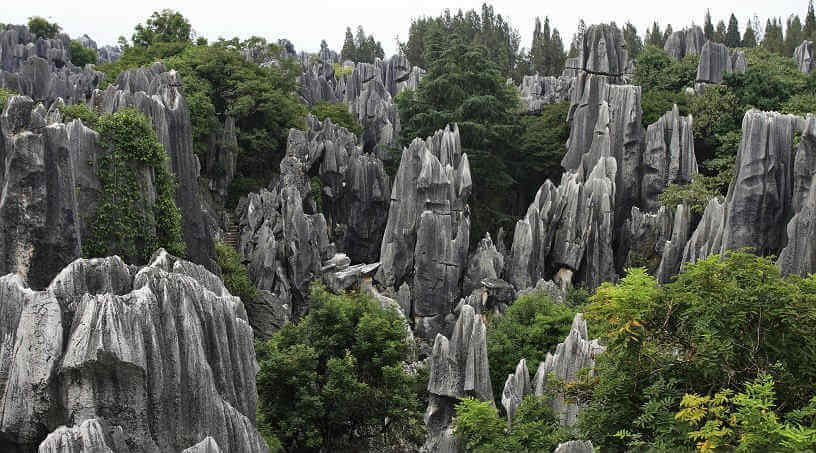 If you've already visited China and seen the Great Wall, Shanghai and the Forbidden City, you're probably looking for something a bit more obscure for your next trip.

You can take your travel to China to the next level by visiting the South China Karst region, in Yunnan Province, which is home to a unique geological site that seems like something out of a storybook.

Imagine an entire forest that has towering rocks sprouting up amongst its trees - that's what you'll encounter on your trip to the Shilin Stone Forests, which have been a place of wonder and enchantment since their discovery during the Ming Dynasty.

The "stone trees" were formed over a period of 270 million years due to erosion and other geological phenomena. Some of them stand as tall as 30 metres high. As you wander amongst them, you'll feel also though you're on a completely different planet.

The word 'karst' is a German term used to describe this sort of rock formation, but those in this region of China are by far the most extensive, which is why they cause so many people to embark on China travel.

The peaks of these rock formations give you unrivalled views of the kilometres of stone forest, making for a perfect photo opportunity.

What else you'll see

Nearby the stone forests is the city of Shilin, which has many modern comforts for today's tourists as well as a rich history to explore. This is an excellent place to book a hotel if you'd like to spend a few days exploring this region and the culture of the Yunnan province before moving on to other destinations in China.

Wherever your China travels take you, get protection for travel delay, baggage loss and overseas medical emergencies with international travel insurance from Cover-More.

The views, opinions and positions expressed by the author and those providing comments are theirs alone, and are meant as travel inspiration only. They do not necessarily reflect the opinions of Cover-More Insurance.