Overview of Cambodia - Climate, Language, Things to Do 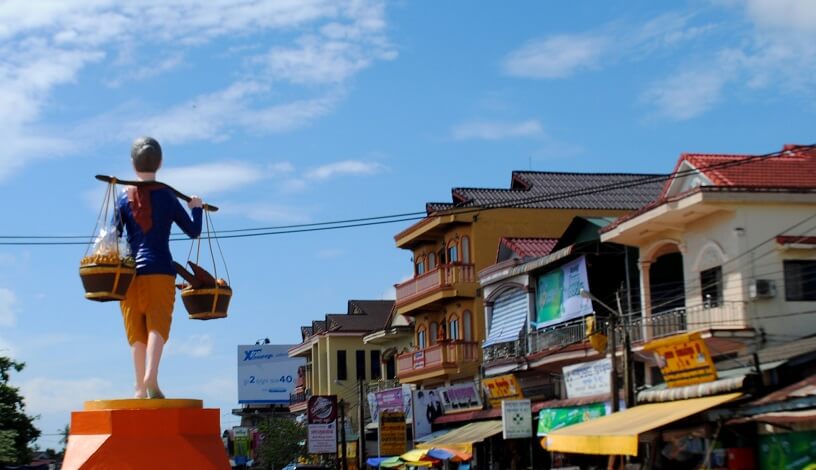 Even with the tumultuous history that Cambodia has, the infectious smiles of its residents will leave you with a sense of the optimism and unbreakable spirit that pervades the entire country.

Where to Go and What to See

With over 2,000 recorded temples in Cambodia, whichever region of the Kingdom your travels take you to, you will have many temples to visit. You will enjoy seeing Cambodia's history come alive in these ancient temples. Just remember to keep a modest attire. Men and women should have shoulders and knees covered, but head uncovered when entering the temples.

Whether you want to trek the jungles of the Cardamom Mountains or explore Southeast Asia's largest Mangrove forest you will find it in Cambodia's Koh Kong province. You'll enjoy seeing abundant wildlife, towering waterfalls, and a long undeveloped coastline.

Not to be confused with Koh Kong, the island of Koh Rong is the second largest island of Cambodia. On the island you will find Cambodia's best beaches—approximately 30 of them. You will also find 78 square kilometres of jungle to trek through.

There are currently four small villages with dozens of guesthouses and bungalows to make for a comfortable stay.

Koh Tonsay, better known as Rabbit Island, is an island located off the south-western coast, near the mainland of Kep City. The beautiful white sand and shallow sea allow for excellent swimming and relaxing in the sun. Rabbit Island is thought to have Cambodia's best beaches and as an added bonus, it is one of Cambodia's last natural islands.

If you know that Cambodia is on your travel schedule, you just aren’t sure when you can fit it in, have no fear! Cambodia has a simple weather system making it perfect to visit year-round.

There are two distinct weather seasons, dry and wet. The dry season usually lasts from October to late April and the wet season sticks around from May to late September. Temperatures will fluctuate during these seasons and you can expect the hottest days to be during the early months of the wet season, usually around May and June, when temperatures will reach around 35 degrees. Humidity will reach its peak during March and April keeping you nice and warm. If you prefer the cooler temperatures, 24-26 degrees, try to visit between October and December.

The primary language in Cambodia is Khmer, although dialects of Thai, Vietnamese, and Chinese can be found scattered throughout the country. Khmer is not a tonal language like its neighbour’s languages. Instead, it is a multitude of vowels, dip-, and trip thongs making it a more difficult language to learn for those not accustomed to it. Though many younger generations learn English and will be able to speak some phrases, the older generations may not be as well versed. Most Cambodians, however, will be extremely appreciative if a visitor tries the language, so if you would like to be respectful and considerate of the residents, pick up a phrasebook and try your hand at the language.

Cambodia has two forms of currency used in its country. The Cambodian riel and the U.S. dollar are interchangeable. One difference is that the Cambodian riel is only used for smaller transactions instead of U.S. coins, which are not accepted anywhere. Credit cards are becoming widely accepted, but it may be useful to have a decent amount of cash, either in Cambodian riel or U.S. dollars, during your trip, particularly if you are planning to visit more remote areas. For the remote, less touristy areas, the riel will be more of use, as there may be fewer U.S. dollars floating around in case you need change.

Cambodia is a safe and friendly country but it is always good to practice general safety guidelines when visiting any new country, especially if you don’t know the language well.

Leftover from the war times are an abundance of land mines, however, the threat to tourists is almost non-existent as most of the larger areas have been de-mined. The true threat will come in for any tourists planning to go on a jungle trek, particularly without a guide or host. Many of the jungle areas are still laden with landmines, so it would be a good idea to gain information about your trek from someone distinctly familiar with the area in which you plan to visit.

In addition to using your common sense in Cambodia, a travel insurance policy can be your best friend while exploring new places.