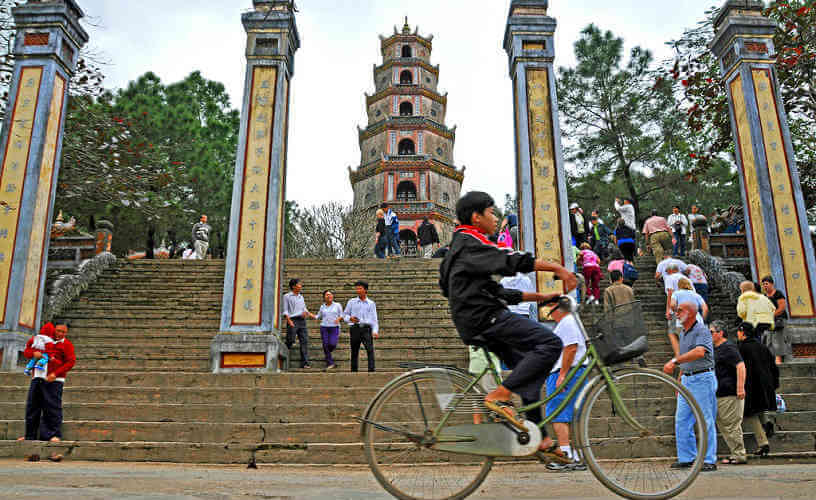 Hue (pronounced “hway”) is located on the banks of the Song Huong-Perfume River where it serves as the capital of the Thien Hue province in central Vietnam. Here, you will find palaces, pagodas, tombs, temples, history and much more to explore and enjoy. While this city doesn’t have the same “big city”-esque vibe as Hanoi or Ho Chi Minh City, Hue has its own charm and draw for tourists and locals alike. Perhaps the most impressive accolade of the city is its UNESCO World Heritage site status. While many of the finest buildings from imperial Vietnam were destroyed during the Vietnam War, there are still plenty of artefacts and history to sate the most voracious of history lovers.

What to See and Do

There are an endless number of museums, places and memorials around the city that deserve your attention during your stay.

The city hosts a huge festival that takes place every other year (in even numbered years), called simply The Festival of Hue. The celebrations include a schedule chock-full of local and international artists, performers and acts. It is one of the most anticipated events on the Hue social calendar, and the festival serves as a point of pride for the Vietnamese as well as an excellent way to enjoy Vietnamese culture for visitors.

One of the high points of the festival is the “Thien Ha Thai Binh” concert. It takes place atop a floating stage in the Perfume River where the Trang Tien Bridge serves as a scenic background. The show will lead the audience through a number of periods in Vietnamese history and how the country has fought, and continues to fight, for independence and peace.

Easily the prime attraction in Hue, the Imperial Citadel is a sprawling complex of moats, walls, temples, shops, museums and more. Throughout the citadel there are pieces of art and costumes from various points in Vietnamese history on display and while it is the prime attraction, it is also massive. This lends itself to a delightfully quiet and peaceful time exploring the grounds—a rare experience in Vietnam.

To properly see the citadel, give yourself more than a few hours. It opens at 6:30am and stays open until 5pm. You’ll pay around 105,000 dong (or $6AUD) for an entry fee, and you can spend as much time in the citadel as you desire. If you want to have a bit of fun, you can pay $1.75AUD to dress up in the King’s or Queen’s clothing and take photos on the imperial throne for a unique souvenir.

Tombs of the Emperors

Make a full day out of visiting the Tombs of the Emperors and you won’t be disappointed. Instead of a bland walk past a number of tombs, you’ll be taking a larger tour of Hue. They are accessible by taxi or bicycle if you prefer that method, though we suggest hiring a river boat and taking to the water for a cruise to the tombs of the emperors. Group tours are available for a mere $2AUD and they often include a delicious local lunch. Generally, the tombs are open from 8am-5pm and tour groups tend to head here from 10am-3pm, so if you can plan to avoid these times, you’ll miss the hordes of tourists descending on the tombs too.

The Thien Mu Pagoda is the official symbol of the city of Hue, and you can see it perched perpetually over a bluff on the Perfume River. Translated, “Thien Mu” means “elderly celestial woman” and the name pays homage to the story about how the pagoda was created/founded. Around the pagoda grounds and within the pagoda itself there are a number of very fine images of Buddha in silver and gold, making the whole place feel especially spiritual and elegant.

In recent years, the amount of tourism in Hue has increased dramatically, especially during Festival years. With this increased tourism also came a flood of touts, or aggressive vendors, who have made Hue their home. Stay aware, avoid eye contact and keep moving if you become a tout target.

The nightlife in Hue is decidedly conservative—most locals are in bed by 10pm, and the choice of bars and clubs is minimal at best.

There is always restoration work that is going on in Hue, whether as a part of the Citadel or general recovery efforts around the city. This has created a completely mixed city where the new and old bump shoulders and fight for prominence. Whether you are visiting Hue for the new or the historical, enjoy your time in this tranquil city without a worry. Count on Cover-More to keep your holiday on track.