Shinjuku Gyoen is the most exquisitely pretty park in the Tokyo region - and it happens to be situated right next to city’s self-proclaimed underbelly, Shinjuku. The trees and plants have such spectacular transformative qualities throughout the year; you don’t need to plan by season to be wildly impressed.

Each season brings new gorgeous sights and smells, providing the perfect setting for couples to picnic, parties to gather and artists to become inspired. Once you step through the entrance gate, it’s easy to forget you’re in the middle of one of the world’s busiest cities. The tall skyscrapers in the near distance emphasise the unimagined tranquillity flowing throughout the 58.3 ha (144 acres) plot. With a circumference spanning 3.5km, it’s easy to miss some tucked away structures and areas showcasing specific flora.

To ensure you make the most of your visit, I’ll walk you through the features of each section within the park. As each season changes, so too does the visitor’s focus and experience; so it’ll be most helpful to share the best bits according to the time you visit. The expansive grounds comprise of three distinct styles: English landscape, a formal French garden and of course, the traditional Japanese garden. Each is beautifully manicured and bountiful in plant species representing their native region. During autumn, all three areas are packed full of admirers —and rightly so given the explosion of colourful plant life.

My recommendation is to spend the first hour sticking to the footpaths. There are so many enormous, stunning trees winding around the trail; you’ll be able to marvel at the different colours and shapes of the leaves while becoming better orientated. The maple trees are in abundance throughout the park, however, make sure you stop at ‘maple mountain’. When the golden leaves fall, visitors become creative; many use the opportunity to make pictures on the pathways or take playful leaf-throwing photos with loved ones. Keen photographs take note, the richest colours usually appear mid-November.

The French garden consists of rose beds and a greenhouse that procures some of the world’s most delicate flowers. The original structure opened in 1892 but was rebuilt in the 50’s. Despite its grand history, it’s hard to fathom there are over 1,700 tropical and subtropical species permanently displayed. Throughout the year, special events showcase popular species. During the first two weeks of November, a chrysanthemum exhibit can be seen in the Japanese Traditional Garden. The Japanese garden incorporates all the best elements of traditional culture. There are numerous small ponds and walking bridges situated under tree canopies or next to hut-style seating areas. The wiry branches of the old pines create spectacular shadows on the grassy noels and reflect interesting patterns upon the ponds. Creeps of tortoise and giant koi (carp) fish can be seen living beneath one of the most popular foot bridges, close to the Japanese Tea House. If you stop and hang your body over the edge, the fish rush to the surface to greet you.

Just a short stroll from the teahouse is the Kyu Goryotei (Taiwan Pavilion). Its open-air design allows for a spectacular view and photo opportunity. The pavilion sits directly above a large pond filled with lilies and more koi fish. It was originally built to serve as a wedding stead for a powerful Taiwanese prince during the Showa period. Now days, when you look out from one of the open windows, you’re likely to see a lone artist equipped with paint and easel. During warmer months, couples and families fill the lawn space with picnic rugs and don’t pack away until they hear the 4pm closing call.

Spring - March to May 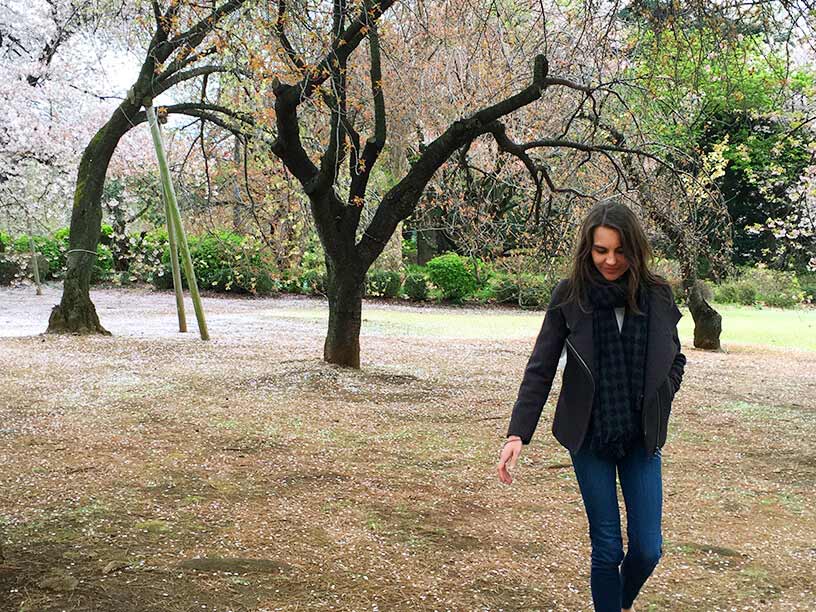 From the end of March to early April, hordes of people come to witness the blooming of the Weeping and Tokyo Cherry tree. With over 60 varieties of cherry blossom, it’s no wonder the place is a buzz with just as many locals as tourists. During the week of blooming, locals gather in the parks to take part in ‘Hanami’. Hanami involves groups coming together to witness and celebrate the fleeting beauty of the cherry blossom. Both young and old relish in the opportunity to gather on tarps and rugs to view the blossom as it grows and falls over the course of the week. It’s a magical time to walk through the park as a tourist, as you see a side of Japanese city folk that you may not witness elsewhere. It’s a time when business men loosen their ties and women are unapologetically playful.

Those who are set on visiting during the cherry blossom season need to be weary of the weather patterns each year. While the blossoms generally flower late March and bloom at the beginning of April, it’s important to note that the festivals occur for one week and kick off according to the first bloom. Over the last few years, the season has begun later than the previous.

The summer air in Tokyo can feel incredibly humid at times, making it difficult to withstand the sun’s rays. Most locals head to the beach to cool down, meaning crowds thin out and shady spots throughout the park are up for grabs to kick back and relax. I recommend setting a blanket down in the middle of the English landscape; you can look up and see skyscrapers and buildings similar to New York City’s Central Park backdrop.

There are several manned structures dotted around the park: an information centre, restaurant and art gallery. On days the weather is not so kind, people retreat to these areas to keep dry while enjoying the calming atmosphere. Braving the sun for a short walk is well worth it, as the warmer weather draws out the sweet smell of the rose and other fragrant plants.

How to get there: There are three entry points: Shinjuku Gate, Okido Gate and Sendagaya Gate. If you’re coming from Shinjuku or Shinjuku San Chome station (closest station), you’ll enter via the Shinjuku gate which is a 5-minute stroll from station exit gate C5.

Casey Hawkins grew up immersed in Australia’s sea, sun and surf culture. She first became a teacher because she was passionate about sharing ideas and experiences. Teaching has led her to explore some unique, remote locations and make friends with people from all walks of life. She is most passionate about learning and sharing their stories with others. Website: Nan’s Lucky Duck