Skip to main content
Home / Blog / Europe / A feast for the eyeballs. Why the Palace of Versailles is a must!

A feast for the eyeballs. Why the Palace of Versailles is a must!

The gold, the gardens, the grandeur! France’s Palace of Versailles is ridiculously ridiculous. Yet it’s totally worth battling the crowds and making the 30-minute train ride from Paris, as it’s a four-course feast for the eyeballs.

In the mid-17th century, King Louis XIV turned his father’s hunting lodge into the magnificent Chateau de Versailles, which was to become the home of the French royal court. The already elaborate palace became a showpiece of grandeur and was expanded by every subsequent king until it resembled a small, extravagant city. The result of all that cash-flashing, palace-building and chest-beating (until the French Revolution anyway) is one seriously opulent palace (one of the most elaborate in the world), which is now on the World Heritage List and a magnet for selfie stick-wielding tourists.

I can hand-on-heart say that this historical theme park is a must-see if you’re within the Paris postcode.

Here are eight snippets of advice to help you get the most out of the experience:

The easiest way to get to Versailles is to take the RER train on the C line (or yellow line if you’re alphabet illiterate). Providing you catch it in the right direction, it’ll drop you at the Chateau de Versailles Station, where the line conveniently terminates. It’s then an easy five-minute walk to the palace. Once disembarking, if in doubt of which way to head, do as I did and follow the throng of tourists marching towards the palace to stage a sightseeing revolution.

The Palace of Versailles is very popular. Although there are no ‘skip the line’ tickets, make sure you have a ticket before setting foot in Versailles. Otherwise you’ll have to line up twice: once to purchase a ticket and then to get into the palace. I had pre-purchased a one-day passport online, which made everything quite easy on the day, simply flashing my printed ticket like I was some kind of VIP.

Even if you’ve purchased a ticket beforehand you’ll still need to line up, and it’s a long, daunting, snaking around the cobblestone foreground affair. The palace opens at 9am and I have no doubt that there is a line long before then. I stupidly stopped on the way for an extra croissant, arriving at 9:45am when the line was spiralling out of control, already so long that I thought I must have been lining up for the latest iPhone. However, the line did move quickly, taking only 45 minutes to get through the doors.

If the crowd situation outside is out of control, inside it’s worse. Prepare to get up close and personal with some strangers as you hip and shoulder your way through the crowds that are reminiscent of a nightclub dance floor at 2am. Particularly in the Hall of Mirrors you wouldn’t want a sudden bathroom urge because with everyone stopping to gawk at the 75-metre mirror-clad ballroom, as they take dozens of photos, you ain’t getting out of there anytime soon. Just on the bathroom situation. Make sure you pack your own loo paper and prepare to line up for minimum 20 minutes to use a bathroom. Best to hold it in and/or dehydrate yourself and avoid the not-so-pleasant experience all together.

Visiting the Palace of Versailles and not paying the extra to meander through the gardens is kind of like going to Paris and not climbing the Eiffel Tower. You have to do it! They’re just as impressive, with grand fountains, surprisingly good but tourist-taxed cafes and on some days music booming from the hedges. When I visited it was the first day after my cat box of a flight from Melbourne to Paris, so I jumped at the chance of walking the gardens. Haughtily laughing at those lazies who were hiring a golf buggy. Well… after roaming the gardens for five hours (which is the amount of time you need) I was more limping than jumping. Put your pride aside and please, I beg you, hire a golf buggy, segway, bike or jump aboard the mini train. Hiring a boat and rowing down the 1.6-kilometre long Grand Canal was a highlight. It was all very The Notebook. Not that I actually rowed; I hired a husband to do this for me, which I would also strongly recommend. 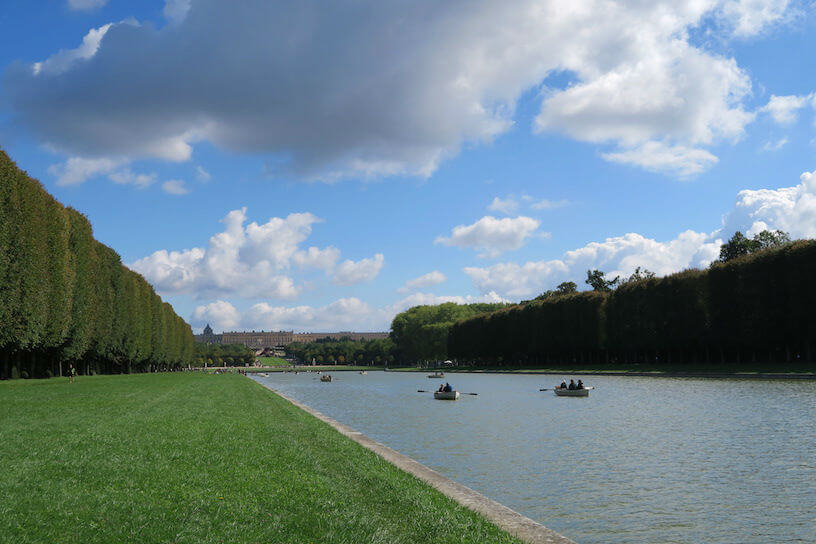 The Palace of Versailles is quite incredible. There’s lots to take in and sometimes you just can’t quite believe what’s before you. Naturally, you’re going to want to photograph EVERYTHING to adequately capture the experience and bore friends, colleagues, family and future children at a later time. Honestly, photos don’t do Louis’s not-so-humble home justice, so take a few snaps, then put the camera away and just live the moment. Chances are your future kids would rather eat broccoli than look at the photos anyway.

Kim Lamb is a Melbourne-based blogger and writer, sharing all things food, bars and travel via her blog Eat Play Love Travel.

The views, opinions and positions expressed by the author and those providing comments are theirs alone, and are meant as travel inspiration only. They do not reflect the opinions of Cover-More Insurance. You should always read the PDS available from your travel insurance provider to understand the limits, exclusions and conditions of your policy and to ensure any activities you undertake are covered by your policy