Learning to surf in Maui

Looking for an adrenaline kick while living the island life? Then head to Maui’s west coast.

Black Rock was formed by a lava flow and is located at the far northern end of Kaanapali Beach. Black Rock can only be accessed by swimming around the rock so it’s only suggested for strong swimmers. Snorkelling off Black Rock is a popular activity due to the clear blue water, there’s lots of fish to see near the rock and you might also see some turtles. South of Black Rock is a beach with small waves that is perfect for beginner surfers.

My friend and I signed up for a surfing lesson with Quentin from 1800 Snorkel – but there are several other surf schools operating in the Kaanapali Beach region.

We were supplied us with reef shoes, a rashie and long board for the lesson.

First, we got instructions on land about where to position ourselves on the board, how to paddle and the best way to stand up. Then we were ready to try and catch some waves.

Quentin helped us every step of the way to get us past the breaking waves (which was hard work) and then set us up to wait for a good wave. When a good wave came along, he told us when to paddle and then we tried to stand.

I was pretty happy to catch a couple of waves and it was money well spent to give something new a try and gain a new appreciation for surfing. From Kaanapali Beach, I headed 10 minutes north up the road to the Kapalua Coastal Trail.

The Coastal Trail starts near the Ritz-Carlton Hotel and you can park adjacent to the hotel grounds and walk five minutes to the start of the trail which is marked by a concrete path leading to the beach.

The coastal trail winds past beaches and panoramic views of the coastline and you’ll be sure to spot some whales breaching out on the ocean.

The trail is an easy 1.5km return but you’ll stop a lot on the way so anticipate about an hour return. The trail is a combination of wooden boardwalks and a well-marked dirt track with some rocky areas. 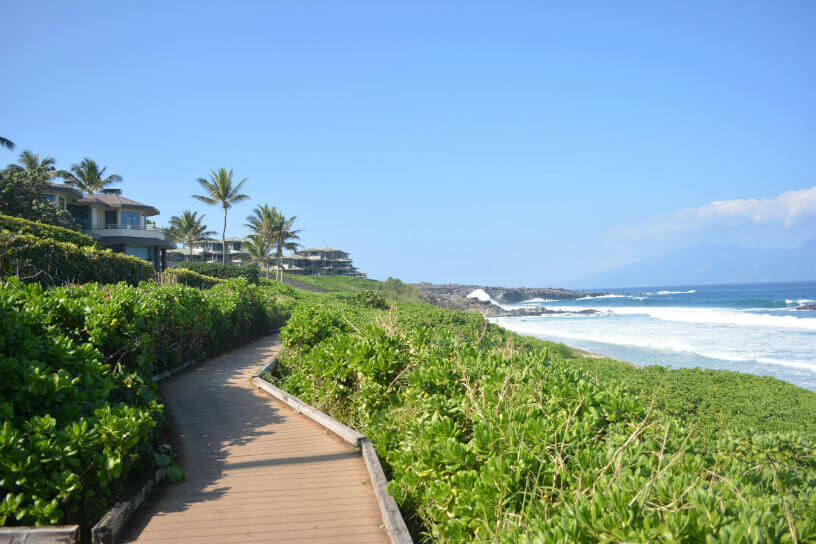 Head out onto the rocky outcrop just after the boardwalk for closer views of the whales and there’s a nice little waterhole fed by the ocean to paddle in – but watch you don’t step on the sea urchins.

The trail takes you down to a swimming spot before reaching a dead end. There’s a small ladder there so you can easily get into the ocean or you can jump in for a swim before returning back the way you came.

Make sure you also check out the labyrinth near the Ritz-Carlton. Head down via the golf course and onto a rocky outcrop on the coast, keep going until you see the labyrinth which you’ll probably only notice when you’re right on top of it. If you’re heading past Kapalua, you might also want to see the Nakalele Blowhole located on the north west headland of Maui.

If you’re lucky to get a very sunny day, you should be able to see a rainbow when the blowhole spouts.

You can walk right near the blowhole – but don’t get too close or you might get sucked in. Don’t miss the chocolate coconut crunch at the food stand near the blowhole – or there’s a number of other tasty homemade treats on offer.