Before my trip to New York, my overwhelming sense of stress was not linked to what I should pack (did I even HAVE enough scarves for a blizzardy winter?) but in fact, collating, noting and slotting in the huge influx of recommendations I had received from friends and work colleagues.

Some were in the form of emails pinged over, others were diary-style files documenting their holiday in bullet point form and some were just off-the-cuff, “You’re MAD if you don’t do this” comments. I was nervous I was going to miss something great, or forget to pencil in a restaurant that I’d end up regretting not going to. It really was intense.

So I did what any person feeling overwhelmed and looking for adventure would do, I noted the recommendations featuring more than once and threw the rest away – I figured that was the best course of action.

What I wanted more than anything was to come back with my own recommendations for my family and friends. That was the goal and that’s exactly what I did. Here’s what to truly add to your list when you head to The Big Apple.

We were staying a street away, E 40th and 5th Ave, and Bryant Park looked about as stunning as you could picture any park to look. Like Home Alone meets FROZEN. You start your night with a little ice skating around the park that’s lit up by fairy lights under a navy sky, then you hop over to either the Bryant Park Grill or Bryant Park Café for a bite to eat. I recommend the Tuscan tomato soup and the ravioli at the BPC! After that it’s time for a few photos in front of the incredible lights outside. Photo shoot, anyone? 2: Dinner, bingo and hula at Tortilla Flats with the girls

This place comes complete with some of the best décor – and the best food - we’ve ever devoured. Instantly you can picture Carrie, Samantha, Charlotte and Miranda sitting at the colourful booths sipping margaritas – in fact, I think they actually did film there. The guacamole is top notch, the margaritas are frozen, with just the right amount of kick, and the fajitas are seriously filling. The thing I liked most was the bingo, seriously entertaining on Monday and Tuesday nights, and I hear hula nights on Wednesdays are not to be missed. When you pick up your New York pass (and I thoroughly recommend you do that), no doubt you want to use your ticket allowance on things like the Empire State Building, the Statue of Liberty or something equally as obvious. My advice is to give ‘The Ride’ a chance. It involves its passengers boarding the bus and sitting sideways to look out the incredible full glass panels on one side of the bus. The bus then drives around New York stopping at different destinations where you run into different personalities on your way. I won’t give away too much, but I will say that it’s an incredible way to see New York – and get more than a few laughs in. 4: Cocktails and Tapas at Mandarin Oriental

We did this on the first night arriving in New York and it was the best first-night-in-New-York-City activity ever. As well as being a warm recluse from the winter snow, it also gave us the perfect bird’s eye view of bustling Columbus Circle below. We headed straight up to the cocktail area, preferring to sample their bar food range of dumplings and smaller bites in a tapas style setting with cocktails to complement. It truly felt like a Sex and the City setting. That wasn’t the only touch of celebrity around. I also bumped into Aerosmith’s Steven Tyler on the way in. The setting of so many movies, my mum was incredibly keen to visit the Boathouse in scenic Central Park. After wading our way through the windy paths of the park, we eventually found ourselves at the Boathouse, which sat the helm of a frozen lake. We were greeted with hot apple cider and shown to our table, which was in front of huge windows, giving us an incredible view of the lake as we dined. We soaked in the glow of the fresh white snow and were honestly a little overwhelmed by how beautiful the setting was. Oh, and the waffles are to die for. 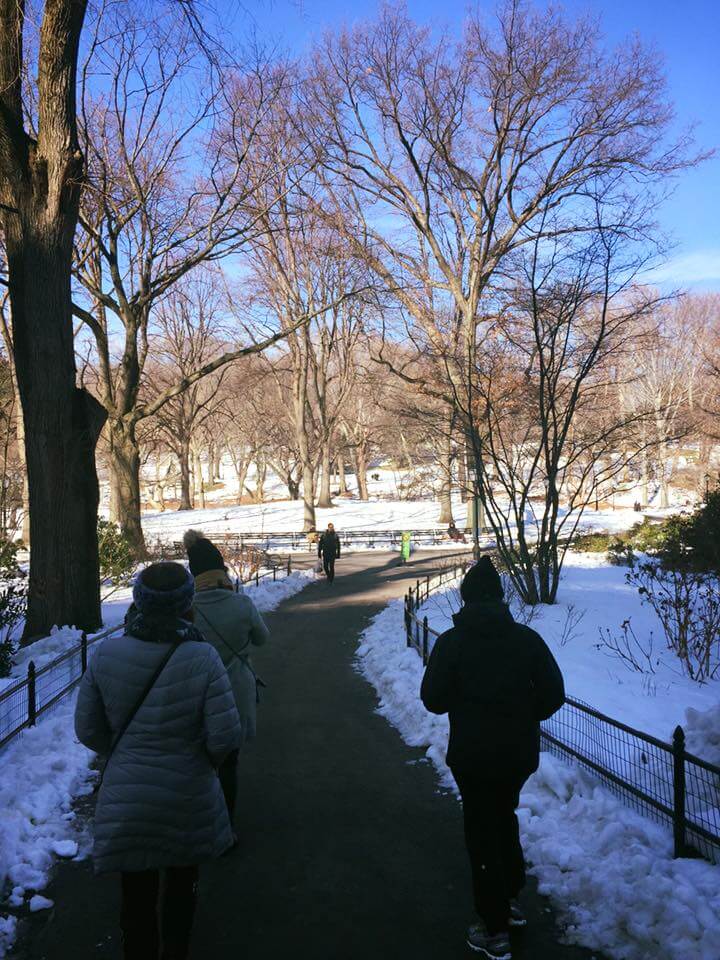