Arriving into Bariloche, Argentina, you could be mistaken for thinking that you’re flying into a European alpine destination.

As soon as you hit the tarmac, the majestic mountains greet you.

The region’s landscape is very similar to the EU, dense with cypress trees, mountains, lakes and quaint villages. I felt I had been transported from South America direct to Western Europe!

Situated on Lago Nahuel Huapi and at the base of the Andes Mountains, the town of Bariloche, otherwise known as San Carlos de Bariloche was founded in the early 1900s. Immigrants from Europe identified with the area, as it resembled many of their own homelands. With an affinity for the region, migrants particularly those of German origin settled here.

Forty years on, the town grew a reputation as an outdoor adventure destination due to its extensive amount of lakes, rivers and mountains. Today, it is a vibrant mecca for travellers wanting to ski in winter, or hike and bike in the summer. One of the highlights during my time in Bariloche was taking the Aerosilla Campanario gondola up the mountain at Cerro Campanario. It has to be one of best panoramas I have ever seen, almost bringing tears to my eyes! Here you can see the whole expanse of this breathtaking region, which includes the big Lake Nahuel Huapi, and the closer, smaller Lake Moreno.

This sightseeing visit, organised by my hotel, was incorporated into a day trip, which included a scenic drive along the spectacular Circuito Chico, a grand tour of breathtaking vistas. The famous Hotel Llao Llao is a popular stop for some photo opportunities and even if you can’t afford to stay here, there are some great vantage points offering yet another round of picturesque perspectives.

From there, we travelled to Lake Moreno crossing the Angostura Bridge. Here the scene seemingly came straight out of a Swiss postcard, with striking yellow flowers in the foreground and the crystal clear lake and snow topped mountains as the backdrop.

Once back in town there are a number of hip restaurants, cafes, pubs and bars that cater for a range of tastes and budgets. Chocolate shops are a trademark of Bariloche and chocoholics won’t be disappointed. Most of the stores are located on Mitre Street and with too many to count; you will be spoilt for choice! This village ambience extends its European feel beyond the natural landscape with its alpine architecture. Ezequiel Bustillo used Patagonian stone and wood with European styles to create a unique architectural style, which can be particularly observed in the city centre, Bustillo’s centro cívico. Also many chalets and hotels in the area follow the same alpine design, giving an overwhelming sense that you are not in South America at all.

If you want to taste a piece of Europe in South America, be sure to include Bariloche in your South American itinerary! 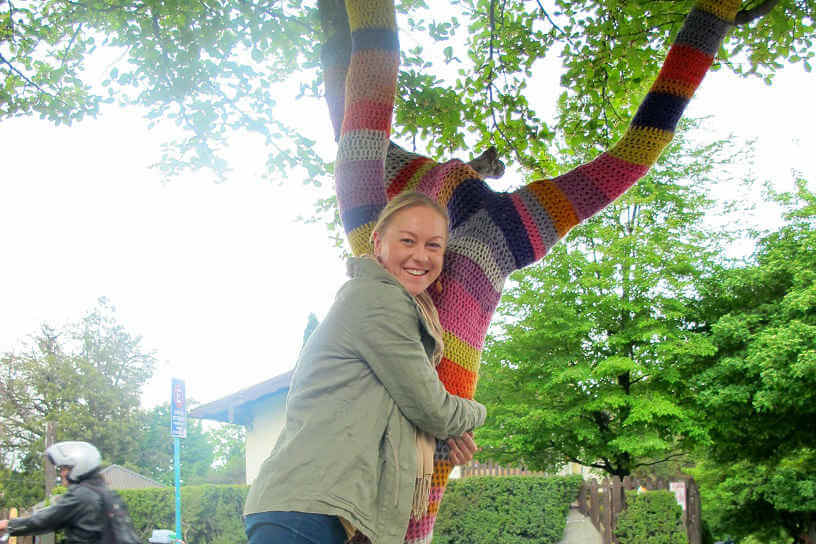 Sally Watson is an Australian Journalist and media exec who loves to travel, discover new places and share stories on her blog Wing Woman Adventures.