How Tulum charmed the pants off me in just 24 hours

Tulum, Mexico is one of my favourite places in the world. The water is the bluest blue, it’s rich in Mayan culture - but the best thing about Tulum is its people.

I only spent one full day in Tulum, but it was one of the most random and charming 24 hours of my life.

I’d been travelling through Central America and befriended our tour guide, Javier. He’d been meaning to visit his Tulum friend, Gustav, and invited me to hang with them for the day. I was up for a bit of a local adventure and I wasn’t disappointed. 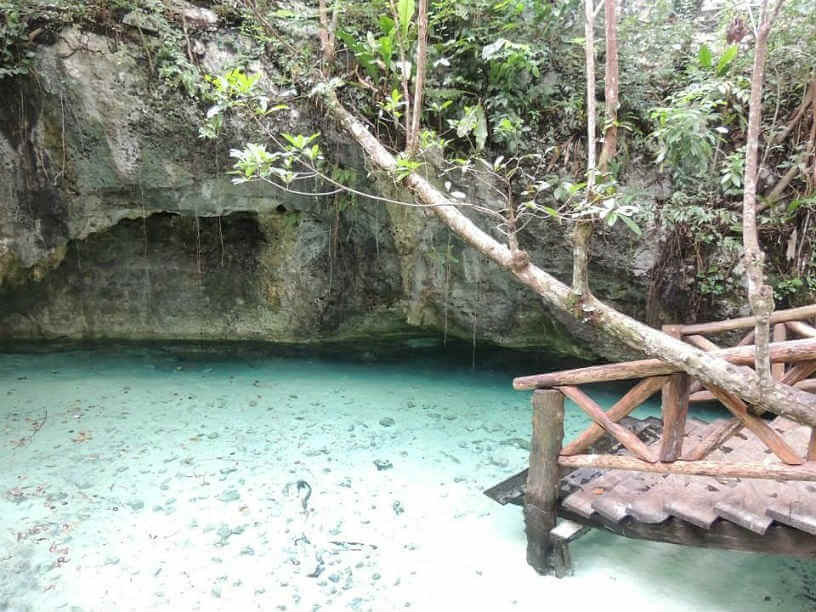 Gustav’s English, much like my Spanish, was limited. Gustav was a jeweller, who lived in a studio that was part of a compound in downtown Tulum. His home was very modest; faded orange floor tiles, one window, his jewellery bench under the windowsill, a small gas burner, and a tiny bathroom that doubled as a kitchen to wash his dishes in - one saucepan, two forks (one metal, one plastic), one spoon, a bowl and two plates. Hanging from one corner to another was a washing line, with a t-shirt that was drying from the night before.

As the guest, I wanted to cook lunch for the two boys, so I pulled out all the stops and made some good old spag bol (spaghetti bolognaise). With only one saucepan to work with, I had to first cook the sauce, dump it onto a plate, then wash the saucepan in the bathroom/kitchen sink, cook the pasta, and stir the meat through. I was nervous about serving it (the Mexican food I had eaten so far was off the charts, so this could hardly compare), but the boys loved it so much they went back for seconds.

Spag bol and beers down, we were ready to hit the beach. Javier and I had ridden bikes to Gustav’s, but since the beach was a while away, Gustav suggested taking his car. I was thankful because my butt and legs were killing me. I was dying for some proper padded seating.

Turns out Gustav’s car was a smashed up 70s VW Beetle; it looked like it belonged in a junkyard. I climbed behind the driver’s seat to find there was barely a back bench. The upholstery was ripped and the foam was poking out. The roof upholstery was almost touching my head. The windscreen was completely cracked all the way across. Javier was acting like the whole situation was normal so I had to be cool, but I was giggling on the inside. Gustav reached to the back, near our feet. The engine was in the cabin! He fiddled around and it eventually started, sending us on our way to the beach. As we pulled out onto the highway, Gustav wound his window down. When I say wound, I mean he opened it enough to fit his hand through the gap, then, one hand on the wheel, he put some muscle into it and forced it down with his elbow. We clunked along, at no more than 30km an hour - the highest speed the car could manage without falling apart!

After about 20 minutes, we arrived at Playa Maya, jumped out of the car, and brought another longneck with us. As Javier and I headed toward the beach, Gustav hung behind, rummaging through his car. He caught up to us holding an old coke bottle. Once we got down to the sand, Javier pulled a swiss army knife from his pocket and started to cut the coke bottle in half. He tipped out the leftovers, opened the beer, and poured it into the bottom half of the bottle. It was our communal schooner glass! I laughed and we sat on the beach, talking about I don’t even remember what. Here were two locals, one I’d known for two weeks and the other no more than a few hours, and I was having the time of my life!

Once the beer was done, we headed back to Gustav’s, but not before stopping at a liquor store for some worm tequila. ‘A couple of shots for the road!’ they insisted. We still had to ride our bikes home and it was dark by now. Then it was tequila and music; we listened to Los Fabulosos Cadillacs ‘Calaveras y Diablitos’ on repeat. A few more laughs and broken English and Spanish goodbyes, and we were on our way back to our respective cabanas. I giggled the whole way home, thinking how positively silly and amazing the whole day was.

I had fallen in love with Tulum, and I knew then that I’d be back.

Emma Chow is the co-host of the Mike E & Emma breakfast show on The Edge 96.ONE. She loves sharing her latest music, travel and fitness finds with anyone who will listen.