Rise and grind: How to survive climbing Vancouver’s Grouse Mountain

'Walking' up Grouse Mountain on the north side of Vancouver is not for the faint-hearted and it’s certainly no ordinary walk up a mountain. This was like a Stairmaster, in nature, on steroids. This was the aptly named ‘Grouse Grind'.

I had been forewarned about climbing Grouse Mountain by some Australians who I met on my first night in Vancouver – they said it was tough.

I consider myself to be of moderate fitness. Not super fit, not super unfit. These Australian travellers looked really athletic, so I took their feedback seriously. If they had found it difficult, I probably would also. I had been weighing up whether to catch the Skyride (cable car) up the mountain for CAD$10 or walk up for free. After meeting them, I decided the cable car was probably the way to go. Then later the same night, I met some Italian guys. When I said I was going to Grouse Mountain the next day, they suggested that they come with me. They went a few times a month - and insisted that I had to walk up.

I thought about it. I'd climbed mountains before. How hard could it be?

So the next morning I met Enrico and Carlo at Waterfront station. From there, we took the ferry to North Vancouver and then a bus to get to the base of Grouse Mountain. Within minutes of being on the track, Carlo was off, like a squirrel up the rocks, disappearing into the distance. Enrico stuck with me for a while, but I insisted that he go on ahead and that I meet them at the top. I could tell pretty quickly that I was not in their league and this was going to be harder than I imagined.

It wasn’t just a gradual incline - it was incredibly steep. I faced a rocky, uneven stairway of 2830 steps over 2.9 kilometres to an illusive peak that just never seemed to get any closer.

I’d been told about the quarter mark and the reality which sets in when you realise you are only one fourth of the way up. I’d been pushing through and came to the conclusion that I must have missed the sign for the quarter mark, figuring I should be well over half way by now. Ten minutes later I see the ‘¼’ sign, nice and clear. I realised those Australians were right. This climb is not your average mountain walk.

It wasn’t so much the distance but the incline which started to wear away at my knees and back. And let’s just say, by this stage I was not the only climber swearing. But there was no way to go, but up.

Theoretically you are not allowed to descend the mountain because it would create too much traffic on the path, making it more dangerous (from the top you have to take the cable car back down). Although I had seen some people turn back, I wasn’t prepared to give up. The guys ahead were good motivation to keep going and every step I took, I knew it was one step closer to the top.

By now, I was being over taken by people in workout gear, without any extra accessories and I started feeling stupid lugging my belongings in my shoulder bag. EPIC FAIL! By necessity, I started to carry my bag under my arms, swapping sides, from time to time. By the half way mark, I was really starting to sweat.

To my surprise, and almost disbelief, there were people running past me up the rocky mountain. Running! Who were these super fit, hard-core, mountain folk, I wondered? Climbing Grouse Mountain was a moment of reckoning. How fit, or unfit was I?

Apparently, the average time to reach the summit is one and a half hours, or two for the novice hiker. I made it in one hour and twenty minutes, with extra weight. Thank goodness, to my relief, I was slightly above average. Carlo made it in around forty minutes. An extraordinary result.

I have trekked in Nepal, climbed Huayna Picchu (the mountain behind Machu Picchu), and done a number of big walks and climbs but I have to say, this challenged me. When I reached the top, it almost felt like I needed a welcoming party like runners do in marathons, or that my passport should be stamped, as if to recognise the monumental achievement of arrival, as you do when you enter the gates at Machu Picchu.

As the Italian guys saw me arrive, they had a beer waiting for me as I made it into the restaurant and visitor centre. It took the edge off my aching body and served as some sort of congratulatory gesture.

In retrospect, I wish I had been more prepared for ‘The Grind’. At least, that I wasn’t carrying anything, and at best, that I had done some steep climbs as training. But the ‘walk’ up Grouse Mountain reminded me of something very important - sometimes when travelling, you find yourself in situations, which are challenging. You wonder whether you can really push through. But when you set your mind to something, and you refuse to give up, you will reach your destination, at least eventually. And that feeling of achievement…is nothing less than euphoric. 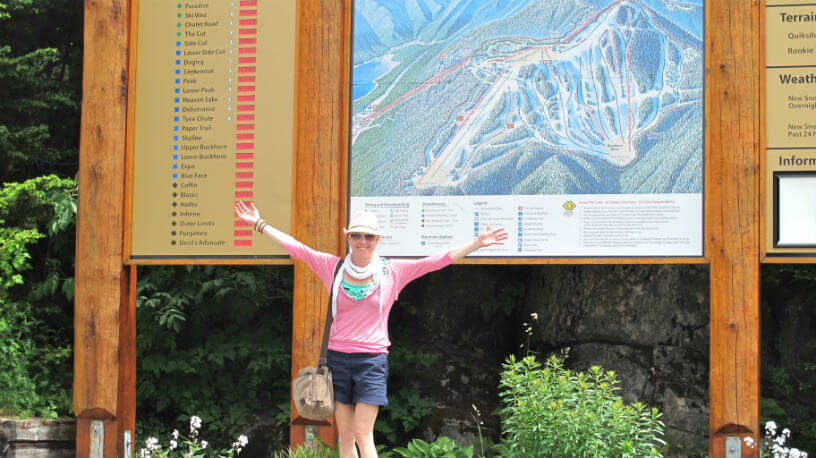 Things you should know

Sally Watson is an Australian Journalist and media exec who loves to travel, discover new places and share stories on her blog Wing Woman Adventures.