Get ready for the Commonwealth Games

With the start of the Gold Coast Commonwealth Games, travellers from all over the world are arriving to witness over 6,600 athletes compete in 18 sports and 7 para-sports. It will be an action packed 11 days so here’s some information to help those that are travelling to the Commonwealth Games.

Consider domestic travel insurance by getting a free quote online. Starting on Wednesday 4 April 2018 with the opening ceremony, the 2018 Commonwealth games will be predominantly on the Gold Coast - with the exception of a few venues located in Brisbane, Cairns and Townsville. The closing ceremony will take place on Sunday 15 April 2018 and is sure to be a site you won’t want to miss. Both of these ceremonies will be two of the biggest celebrations Queensland has ever seen.

Whether you’re heading to see one event in particular, or have managed to grab tickets to a few, the Games has something to peak anyone’s’ interests. Check out the sports on show below: There is a whole lot more that the Gold Coast has to offer then just the 2018 Commonwealth Games. This lively place is lucky enough to have about 300 sunny days a year, so be sure to make the most of the amazing beaches and endless coastline. If you do plan to go out and about in the sun, be sure to take some sunscreen and a hat - even if it is cloudy or overcast as the UV rays in Queensland can be harsh. When the sun is shining and you decide to head to one of Queensland’s many amazing beachers, be sure follow the Australian Motto Slip, Slop, Slap.

Slip on a shirt.

Slop on the SPF 30+ sunscreen (reapplied every 2 hours or after swimming).

Slap on a hat.

Most beaches are patrolled by lifesavers who indicate safe swimming zones with red and yellow flags. Swimming outside these zone can be very dangerous, as strong rips have the ability to pull swimmers out to sea.

If there is an emergency in which you need the Fire department /Police /Ambulance the number to dial is 000. 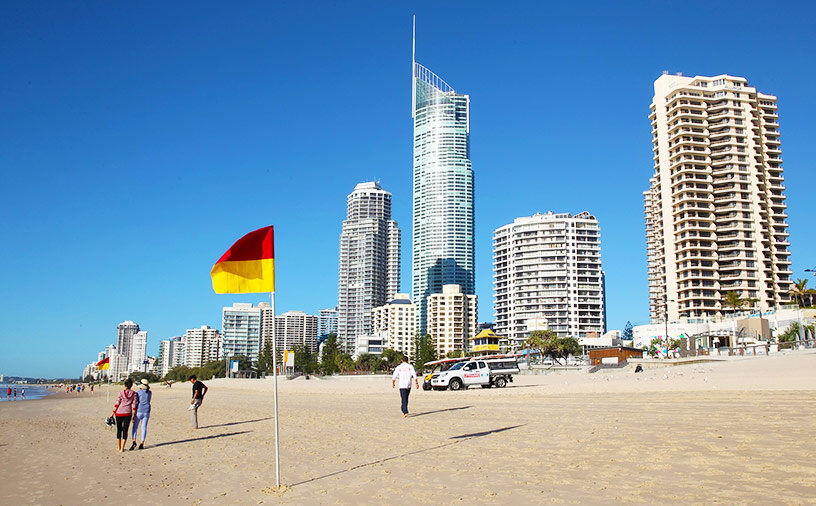 With close to 1.5 million spectators expected at the Games, the areas are bound to get busy! Luckily, there are many options for getting around during the Commonwealth Games.

The Gold Coast airport is the official airport of the Games and is served along with a number of public transport services and labelled taxi pick-up zones.

If you are staying in Brisbane, taking a train may be your best option to get down to the Gold Coast. There will be plenty of train services operating between Brisbane and the Gold Coast during peak travel periods.

The tram is a great way to get around the events and festivities between Broadbeach and Helensvale. They also run 24 hours a day from April 4 to 15.

In peak event periods, there will be a service running every six minutes.

Most bus routes will run every 15 minutes or better between 7am and 7pm from 4 – 15 April on the Gold Coast.

Games shuttle buses will be available to ticketed spectators and will run regularly connecting transport hubs directly to and from competitions venues. They will run up to 2 hours before the event and up to 1 hour afterwards. Many of the venues and festival locations during the games are within walking distance from many accommodation hubs. Walking also happens to be one of the best ways to experience the local surroundings and get to venues. There will be plenty of signs, routes and guides to help you get around the Gold Coast.

With over 1,000km of on and off road bikeways, cycling can be a great way to get around. There will be a number of cycle park locations set up close to competition venues and festival precincts. Keep in mind that due to extra people travelling to and from the Gold Coast during the Games time, bicycles will not be permitted on public transport.

Although Australia is considered to be a safe country, there are still risks when travelling to an event as large as the Commonwealth Games. Be wary of many scams that come from the busy nature and watch out for fake betting events. Some of these activities have been reported across Australia with major sporting events so it is possible for this to occur during the Games.

Criminals tend to purchase large quantities of event tickets with stolen credit cards and sell them well below the actual cost. You may be turned away if in possession of one, so avoid buying significantly cut ticket prices or tickets sold not from credible agents. It’s best to simply purchase event tickets from authorised vendors.

The Gold Coast Commonwealth Games are set to be an amazing spectacle! It’s best to be prepared and plan ahead to make most of Queensland and all the great events throughout the games.