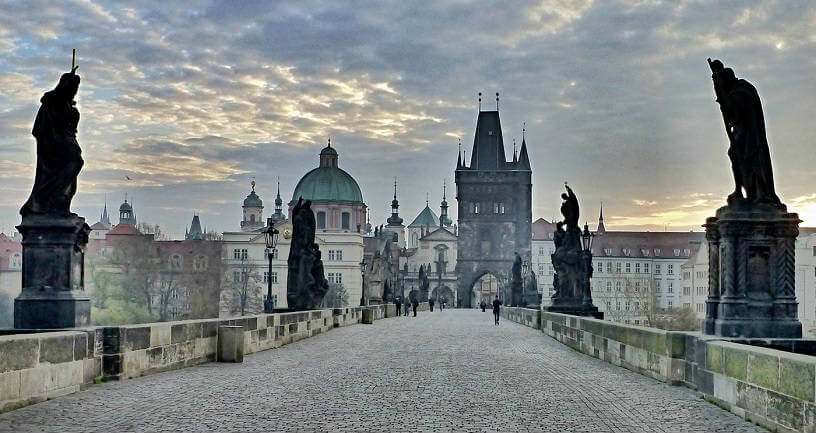 Before you go, brush up on tips to improve your photography—you will not want to miss a single shot of these beautiful castles.

In the Czech Republic, the past becomes the present. This small country is graced with hundreds of ancient castles that illustrate its rich and eventful history.

Otherwise known as Pražský hrad, Prague Castle is considered as one of the most culturally-significant Czech monuments. It is no surprise, too, as the spires, towers and palaces of Prague Castle dominate the city centre. The Prague Castle has a history that begins in the 9th century, and is the largest ancient castle in the world. The Prague Castle is a must-see, and the massive structure can only be truly experienced firsthand. Visitors can walk around the courtyards for free or visit the castle on a guided tour that can cost anywhere from A$19 to A$50.

The Český Šternberk Castle is one of the best-preserved medieval castles in the Czech Republic. This Bohemian castle of the mid-13th century sits on a high rock above the Sázava River. It is an early Gothic castle that was constructed, named and is still owned by members of the Šternberk family. This residence bears a long historical and architectural heritage, and this castle truly takes its visitors back to the 13th century, an experience unlike any other. The castle is open for public visits that cost around A$15.

This Renaissance castle is the second largest in Prague. It was constructed in the 13th century, where it still stands on the west bank of the Vitava River. This State Castle was erected in Gothic architecture that was later refined by Renaissance motifs. After the 17th century, the inside of the castle was reconstructed in Baroque style. The interiors are accessible by guided tour only, but you can stroll the remarkable grounds on your own.

As one of the most popular tourist attractions in the Czech Republic, the Karlštejn Castle transports you to a mythical land. This large Gothic castle was built in 1348 AD by the Holy Roman Emperor, Charles IV, to protect holy relics and the coronation jewels of the Holy Roman Empire. The castle was built upon a peninsula, providing the perfect site to enjoy the breath-taking views of the village Karlštejn and the mountains among which the castle rests. Visit Karlštejn Castle for nearly A$17.

This small country is loaded with history, and the medieval castles are some of Slovakia's most popular destinations.

Spiš Castle was constructed as early as the 13th century, and the central tower offers incredible panoramic views of the entire Spiš region. While the castle had to be restored after the original building burnt down, the reconstructed Spiš castle is still worth the A$17 visit as it represents the architectural development from the 12th to the 18th century. The Spiš is one of the biggest castle complexes in central Europe, so learn how to improve your photography to make sure you capture all of the vast Spiš castle and the scenic views it offers.

Orava Castle is located on a high rock above the Orava River, and dates back to 1267 and is considered to be one of the largest and most beautiful castles in Slovakia. Many scenes of the famous 1922 vampire film Nosferatu were filmed here, making this Orava Castle's claim to fame.

Legend has it, the castle has one mirror where the reflection will make you beautiful and another that will make you ugly-so be sure to look in the right one. Enjoy the tradition behind Orava Castle for A$20.

This Slovakian castle is often referred to as the Red Stone Castle. However, the castle is actually white and only called red because of the type of stone it is made with. Červený Kameň Castle is known for its massive cellar and dungeon complex, along with the impressive external Gothic features and its interior Baroque charm. Experience the incredible internal and external features of this Slovakian castle on a guided tour for A$7.

Bojnice Castle is nothing short of a romantic, fairy tale castle. This 12th century castle is one of the most-visited and most-attractive castles in central Europe. It is located on the edge of the Strážovské Vrchy Mountains and is renowned for its attractions, especially the museum of art and history that is located within the castle. The museum will transport you back in time with the displays of original furniture, artefacts and paintings from the 14th century. Be sure to visit the International Ghosts and Spirits Festival, Bojnice Castle's biggest annual event held in May.

International travel insurance from Cover-More Travel Insurance will protect you and your travel companions on your next adventure to the Czech Republic and Slovakia. Relax knowing there will always be someone at your back if the unexpected occurs.

Image courtesy of Flickr userTravel via Europe; cropped from original