4 Translation Apps To Help You in Cambodia

Khmer, also called Cambodian, is the language spoken by most of the people of Cambodia, as well as in parts of northeastern Thailand and southern Vietnam. Khmer belongs to the Austroasiatic group of languages, which are widely spread throughout mainland Southeast Asia.

For anyone visiting Cambodia, there is good news: Khmer is not a tonal language like Vietnamese or Thai, so it’s easier to learn some basic vocabulary without having the worry of proper intonation. The easiest way to get a quick lesson in Khmer is to use a translation app. They provide helpful information and immediate feedback – which can be invaluable when you are trying to hold a conversation.

As you travel, you will learn, and more likely than not it will be fun to pick up new words and to connect with locals. In reality, any effort you make to learn Khmer will be greatly appreciated by Cambodians and in more cases than not, they will know at least a little English to make the conversation flow easier.

By downloading a translation app to help you learn Khmer, you will always have a way to communicate with the world around you. After all, translation tools have come a long way in recent years, and with the variety of input methods and support at your fingertips, you will soon be making your way around Cambodia with no problem. You have probably already used this popular website, as Google Translate is one of the best translation tools out there. The teams at Google have created an app that goes beyond entering what you’d like to say and having the app regurgitate it in the language of your choice. With recent updates, Google Translate can now automatically translate a sign if you point the in-app camera at it. That way, if you are lost and need to see what a road sign says, simply pull up the app and you’ll know whether to take that left or right.

It’s available for download in Google Play and the App Store.

While Khmer is the most popular language in Cambodia, Chinese, and many other dialects are also heard throughout the country — especially with older generations. To help with these translation, download Waygo. It is an offline translator and dictionary for Chinese, Japanese and Korean. You will be able to translate text from your phone camera or photo instantly while offline. Plus, as an added bonus, you don’t need a data connection to translate your data so you can use it anywhere you go.

It’s available for download in Google Play and the App Store.

If you aren’t worried about the high-tech parts of all the apps above and want a simple, straight-forward translation app for your Cambodian holiday, then go for Translate Me. This app provides a convenient and useful way to translate written words between two chosen languages. With this translator in your pocket you'll never be misunderstood!

Whenever you visit a new country where the language and alphabet is different from your own, trying to understand signs and communicating can be difficult. Instead of going in with a blind eye, practice these phrases and buy travel insurance. This combination will help you get around quickly, effectively, and without fear. No matter where you are Cover-More understands you. 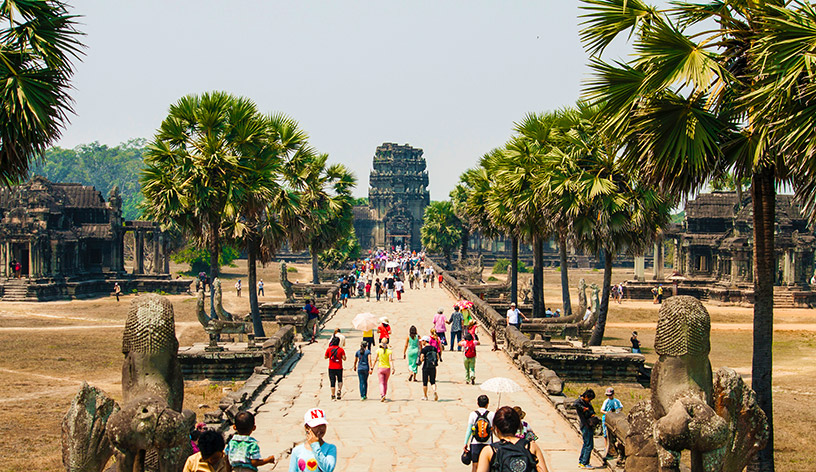