How To Visit Chernobyl

Have you ever considered visiting Chernobyl? This site is appealing for tourists wanting to learn more about the disastrous nuclear explosion of 1986, or those wanting to explore a place abandoned by humans 30 years ago.

The journey to the apocalyptic town of Pripyat in Ukraine’s central north was one of the best tour I’ve ever been on and here's why...

Skip ahead to find out:

What happened at Chernobyl?

You may not have heard of Pripyat but I’m sure you’ve heard of the Chernobyl Nuclear Power Plant disaster – even if you weren’t born when it happened. I was only two years old at the time.

In the early hours of 26 April 1986, the plant’s Reactor 4 exploded sending a radiation cloud over Pripyat and north across what was then the USSR, and up to Scandinavia.

For Pripyat, it was devastating. Pripyat in the Ukraine was home to many plant workers and their families. It was a bustling town that was established in 1970, at the same time as the Chernobyl Nuclear Power Plant.

30 years on, the town of Pripyat remains abandoned and will likely be that way for the next 20,000 years.

Today, radiation levels are low enough that day tours are run from the Ukrainian capital Kiev to explore Pripyat, and see the sarcophagus over Reactor 4.

While the subject matter is dark and very sad, the content of the tour is fascinating. You don’t just journey to an abandoned town shattered by a disaster, but you learn about the events leading up to it and the response. This is what makes this tour the best I’ve been on. You are immersed in the history and then you stand where it took place and it feels like time has stood still for 30 years. Find out how to capture photos that embody the essence of a Chernobyl tour.

Is it safe to go to Chernobyl?

But first, here are some facts about the radiation levels at Chernobyl – and in your daily life...

In comparison, San Francisco, for example, experiences an average of 0.21 sieverts per hour. During a flight, you experience up to 8.0 sieverts an hour. A dental x-ray exposes you to 5.0 sieverts, while a chest CT scan is around 7.

If you stand right in front of the sarcophagus over Reactor 4, the Geiger counters record an average of 3.50 sieverts per hour. The average dose of radiation received during a day trip to Chernobyl is 2.2 sieverts. This is equal to a one-hour flight.

I did my research before I went and the information provided on the day of the tour confirmed it...

You receive a higher radiation dose with an x-ray. So, I was very comfortable going to Chernobyl and did not return radioactive!

​How much radiation are you exposed to on a tour of Chernobyl?

Most people will experience an average dose of radiation around 2.2 sieverts during a tour of Chernobyl. This is less than an x-ray. You are required to pass through radiation control machines at the two checkpoints after your tour, to ensure radiation levels on your clothing and shoes are within safe levels.

If not, you will be required to wash or leave behind any items that don’t pass the test. But it is rare for anyone to not pass this test. If Ukraine isn't the only destination you're visiting, find out the best ways to get around other parts of Europe.

How can you visit Chernobyl?

There are several tour companies based in Kiev offering day trips to Chernobyl. You'll need to provide your passport details when booking the tour. This is provided to the checkpoints ahead of time to ensure you are granted access to the exclusion zone. You need to bring your passport with you on the tour for military personnel to crosscheck against their manifest.

I bought my tour via Dream House Hostel where I stayed during my time in Kiev, and I paid ahead of time through their secure booking system. Book the Chernobyl tour at least 10 days ahead of your desired date to ensure a place.

Along the way our guide, Igor, provided details of the buildings we enter and what life was like in Pripyat before the disaster. Also included in the Chernobyl tour is a look at a former Soviet military radar, which was part of the Soviet early warning system.

What should you wear to Chernobyl?

Dress code for the tour is enclosed shoes, pants and long sleeved shirt. No t-shirts or shorts are allowed. Do not sit on the ground when taking photos and avoid touching any items in Pripyat such as dolls or gas masks.

What do you see on a Chernobyl tour?

The tour starts at 8.30am with a two-hour drive to Pripyat. You have to pass through two checkpoints manned by military personnel to get there.

The Dityatki checkpoint is at the start of the 30km exclusion zone around the power plant, while the Leliv checkpoint is 10km from the plant.

During the drive, engaging documentaries tell the story about the explosion, the evacuation of Pripyat, the response to put out the fire in the reactor, and the process involved in sealing up the reactor.

The first stop is at the main square of Pripyat. To my left was the supermarket, but mostly we are surrounded by forest which has now taken over the city. 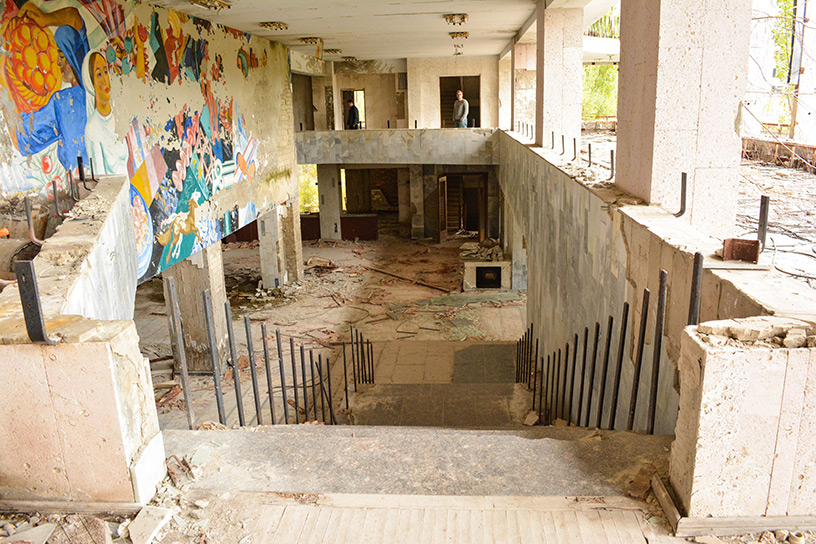 We walk through the forest into the cinema complex, walking up bare staircases into rooms filled with debris and shards of glass.

In the aftermath of the Pripyat evacuation, the town was looted for useful items such as radiators and aluminium from window frames. The glass was smashed out from many windows and lies scattered across the ground, crunching underfoot with every step.

After the cinema, we head to the amusement park. The town’s amusement park and sports stadium were actually never used. They were due to be officially opened for the town’s planned May Day celebrations, but now the yellow ferris wheel stands rotting and the dodgem cars sit haphazard.

The stadium ground has been overtaken by the forest, but you can just make out the running track.

From there, we head to the kindergarten, which is filled with discarded dolls and wooden children’s beds.

Then we climb up 15 floors inside one of Prypiat’s tallest apartment buildings. You see the layout of the apartments, which now lay bare of any personal effects but contain items like lounge suites and cabinets. The stairs are also stripped of railings.

You can see from there how the forest has overtaken the town, and not far away lies the Chernobyl Nuclear Power Plant. You can clearly make out the sarcophagus, which is currently being built over Reactor 4 to seal in the radiation, replacing the previous sarcophagus put in place months after the explosion.

We then head to the gymnasium and swimming pool complex. The swimming pool was still used by workers at the nuclear power plant until 2001, at which time the plant was completely closed down. The adjacent primary school is three floors of scattered desks, propaganda posters, and rooms littered with children’s gas masks. The town was mainly populated with families, with more than 1,000 babies born each year. There are many schools and kindergartens throughout the town of Pripyat. The hospital is one of the creepier places on the tour. It was the first hospital that received the first casualties of the disaster. The hospital is littered with medicinal containers and several items of medical equipment. Are you eager to have more unique travel experiences around the world? Check out these extraordinary things you can do in Brazil.

Lisa Owen is a pint-sized Australian following her dreams to travel to as many places as she can, and loves to share her photography, travel hacks, hiking adventures, and food discoveries along the way. At last count, she has travelled to more than 80 countries in between working in public relations and discovering hidden gems in Australia's great outdoors. Instagram: @thelittleadventurer Facebook: The Little Adventurer Australia