Pyramid gazing in the Egyptian capital

If you know only one thing about Egypt, it will be the existence of the Pyramids of Giza. When I saw the Pyramids in person, it was very surreal. You grow up learning about the Pyramids at school. Hearing about this grand feat of engineering and the theories about how they were built. A trip to Egypt wasn’t part of my travel plans this year – in fact, I’d always just said ‘one day’ - but on a recommendation from a fellow traveller combined with coming across a heavily discounted tour, I booked a flight to Cairo. On the second day of my tour, I stood face to face with the Pyramids. I sat on the Pyramids, gazing up at the giant stone blocks and feeling very small. You could hear camels in the distance; scarves and pyramid statues were waved in my face by market vendors; foreigners took photos of me and I posed for a photo with an Egyptian family.

The sun beat down on my face and arms as I vainly tried to retreat from the sun and seek some shade. There was not a single hint of breeze in the desert landscape. But you could forget the heat and the touts as you took in the scale of the Pyramids and the Sphinx standing tall in the golden sand and wonder how the Egyptians built them so many thousands of years ago. The Pyramids are located in the Libyan Desert in the town of Giza, on the outskirts of Cairo. The first pyramid you come to is the Great Pyramid or the Pyramid of Khufu. Behind it is the Pyramid of Khafre which still has its original limestone covering at its peak. The third pyramid is Menkaure. You can get a good photo of all three of the pyramids from the panorama point next to the Camel Station. You can also go inside the pyramids to take a look. The Pyramid of Menkaure is your cheapest option and costs $A4 to enter. It’s a steep descent and not for anyone with claustrophobia.
The Great Sphinx is located to the east of the Pyramids. These days, Egypt is still struggling to attract tourists after the 2011 revolution. The Pyramids was strangely one of the least touristy sites on my visit to Egypt, and you’re sure to get a photo without being photobombed. If you want a ride a camel at the Pyramids, make sure you do it from the official Camel Station at the panorama point. The other camel operators are not official and very likely to overcharge. A common trick is to quote a figure to take you out there, but they will ask for more money once you have travelled about 20 minutes in the desert and want to get back. The figure quoted by the camel handlers in the official Camel Station is for a return trip and you pay at the end. Expect to pay no more than 100 Egyptian Pounds (about $A8). 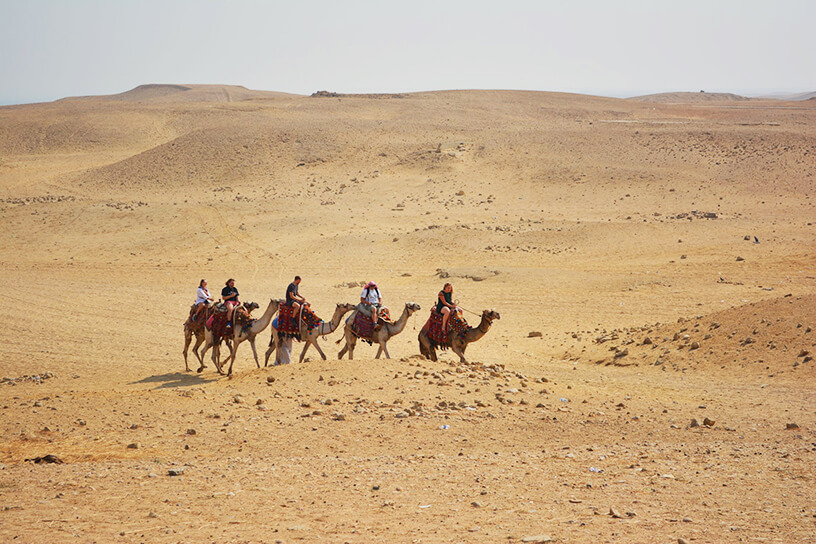 You can also see the Pyramids under the night sky at the Sound and Light Show. The one hour show is held every night from the seating area near the Sphinx and tells the story of the Pyramids complex. The English show is held from 7 pm between October and April, and from 7.30pm between May and September.

The Egyptian Museum is another must see in Cairo. The museum contains more than 160,000 artefacts throughout its 107 halls – with some items dating back 5,000 years. 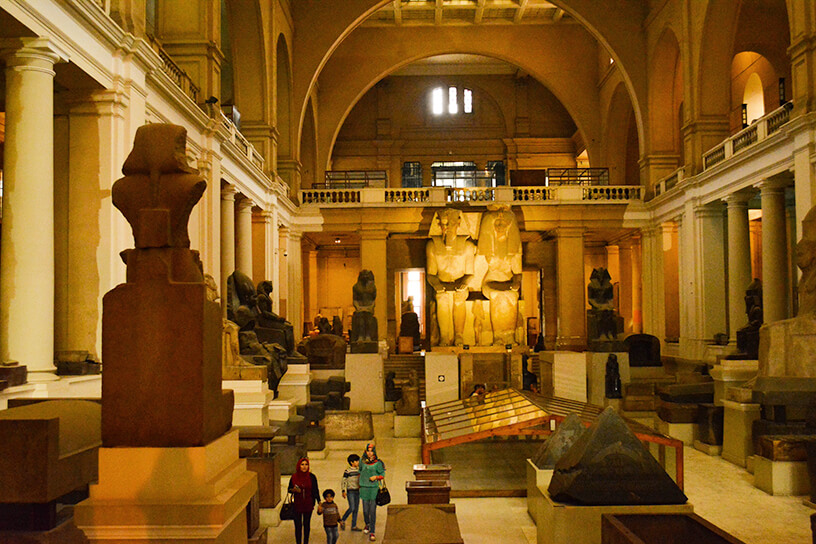 Most of the objects relate to the time of the Pharaohs, and highlights include the Mummy’s Room containing many of the New Kingdom royal mummies, as well as the treasures found in Pharaoh Tutankhamun’s tomb - including the famous gold mask found on Tutankhamun’s mummy. The Mummy’s Room cost $A8 to enter on top of your museum ticket. You can do the museum yourself as explanation boards are in English as well as Arabic. The museum is open from 9 am to 7 pm. Entry is $A4.

The Cairo Bazaar, locally known as Khan el-Khalili - is a sensory overload of colour and sound. The souk is a maze of winding streets and is popular with both tourists and locals.

Be careful what you buy here as it is mostly fake. For example, the Egyptian cotton is not the real deal, neither is the papyrus. It’s best just to stick to small souvenirs in any of the Egyptian markets you come across. But it’s fun to look. After a few days in Egypt you will get used to the constant hassling trying to sell your stuff and it becomes white noise. But there’s some entertainment value in hearing what the vendors come up with to try and engage you in conversation. I was asked how many hearts I’d broken and told I was worth one million camels. They can certainly spot the Australians and New Zealanders – we often heard ‘Oi, Oi, Oi’ as we walked along. The guys we were travelling in our tour were told repeatedly they were lucky men with their many ‘wives’. The best thing to do is simply ignore the vendors if you’re not interested in their wares. Don’t even say no thanks as it will lead to a conversation that is hard to escape.

The streets of Old Cairo are worth a look during your trip to Egypt. First stop should be the Babylon Fortress, followed by the Hanging Church. The Hanging Church is so named as it does not have solid foundations. It hangs about the fortress on several pillars. I’ve seen many churches in my travels but this one is slightly different to others largely due to its wooden roof shaped like Noah’s Ark. It’s free to enter. Know Before You Go

Egypt is not a walk in the park and even as a seasoned traveller on tour, I found it was quite a culture shock – particularly in Cairo. Egypt can be hard work - even on an organised tour because of persistent bazaar merchants, poor roads and long distances. These are the things I wish I’d known before I went to Egypt, and helpful tips I learnt along the way that will help prepare anyone planning to visit.

My first piece of advice is – it’s safe to come to Egypt – but on an organised tour. The biggest issue with Egypt is that most of it is desert meaning there are many isolated areas, and roads can close at short notice. There are also many people trying to take advantage of tourists – such as taxi drivers, camel handlers, guards at tourist sites, and felucca masters. It’s possible to do Egypt on your own, but it will be more comfortable, more efficient and safer to do so on a tour.

The roads are in a very poor condition in Egypt. They’re narrow, bumpy and there’s lots of speed bumps It takes a long time to get anywhere due to the road conditions and checkpoints. Checkpoints are located every few hours along the road between Cairo and Luxor and entry points into major cities. There can often be delays at the checkpoints. If you’re prone to motion sickness, come prepared with travel sickness tablets. I am very prone to getting car sick, but managed to get through fine with some medication.

It’s not advisable to roam city areas in Egypt on your own – particularly as a female. Safety in numbers really applies here. This is largely to minimise how much you get hassled to buy stuff or give money. Don’t think you can just blend in and you wont’ be hassled. Most often, you will likely be the only foreigners on the street. When walking with my group in Aswan through the Tourist Market one morning, we didn’t see a single other foreigner in the hour or so we were there.