Explore volcanoes from the air and underground

One of the main things that first attracted me to visiting Iceland was the idea of getting close to an active volcano. I’d always been intrigued by them ever since learning about the destruction of Pompeii by Italy’s Mt Vesuvius.

So of course, first of my list of things to do in Iceland was see a volcano. And I did – by going inside one. Iceland’s Inside the Volcano tour takes you into the depths of the dormant Thrihnukagigur Volcano – located about 20km from the capital Reykjavik. The volcano last erupted 4000 years ago, creating a crater which didn’t collapse on itself and provided an open entrance.

The journey starts by hiking 3km to the volcano. It’s a fairly easy 45 minute hike past lava fields and lava tubes with an informative guide telling you all about Iceland’s volcanic history along the way. The landscape out to the site features kilometres of lava fields and volcanoes. Iceland is certainly unique.

Once you reach the volcano, you’ll be provided with gloves, a harness and a helmet. The harness is just a safety measure for when you’re lowered in and out of the volcano.

Then you get into a contraption similar to what you see high rise window washers use, and are lowered down 120 metres to the bottom of the crater. You’re then free to roam around the crater – navigating your way along the volcanic rock to the sides of the crater. It was a pretty cool experience. How many people can say they’ve gone inside a volcano?

The tour operates from May to October with several tours daily. Cost of the tour is $A450. Yes, it’s ridiculously expensive (get used to it in Iceland) but it’s a unique experience that I’m certainly glad I did.

Another bucket list activity was flying over volcanoes and getting a bird’s eye view.

I flew with Reykjavik Helicopters – it totally blew my budget but it was worth it. There were so many times I said ‘wow’ during the hour long flight and almost couldn’t believe the beauty of what I was seeing below me.

I flew out of Reyjkavik over the lava fields, and then headed past the Seljandafoss waterfall, across the black sand beaches near Vik and then over the Eyjafjallajökull volcano – infamous for the 2010 eruption that grounded flights across Europe due to its volcanic ash cloud.

Even at the height of summer, the volcano is covered in a thick blanket of snow while the mountains around it are bright green. It was breathtaking hovering above the snow covered slopes of Eyjafjallajokull Volcano and seeing the volcanic influenced landscapes around it.

During the flight I also saw the Hekla Volcano and got close enough to see some hikers making their way up. Hekla is another of Iceland’s most active volcanoes. 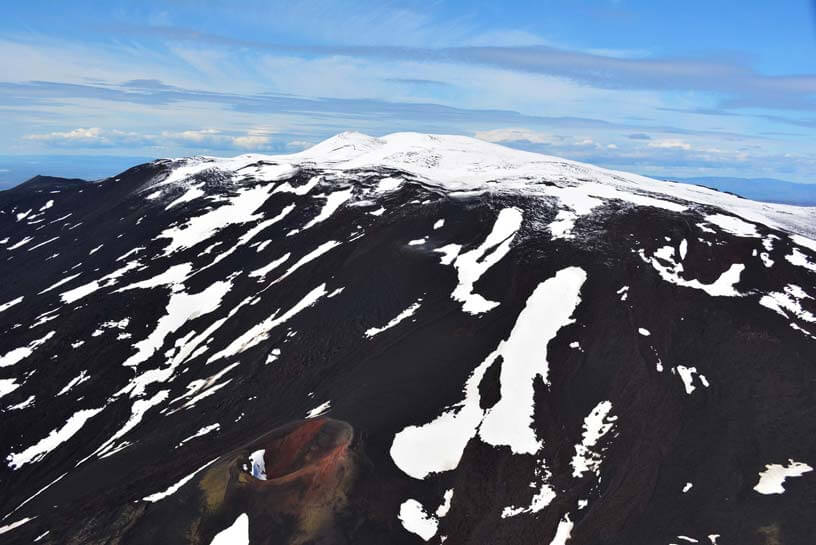 Reykjavik Helicopters can package up a flight for you that will suit your needs. The more people you get to come along with you, the cheaper it gets per person.

Another volcano to visit is Snaefellsjokull on the Snæfellsness peninsula in Iceland’s west. It’s about a two hour drive from Reykjavik through beautiful scenery and quaint villages. Snaefellsjokull is another active volcano and it’s topped with a glacier – you might have seen it in the Ben Stiller movie The Life of Walter Mitty.

After visiting some of Iceland’s volcanoes, go relax at lagoons heated by geothermal energy. The Blue Lagoon and Secret Lagoon are among Iceland’s most visited thermal pools. The Blue Lagoon is very popular with tourists, but for a more relaxed and local experience, head to the Secret Lagoon near the village of Fludir – about an hour from Reykjavik. The geothermal waters remain a steady 38-40 degrees year round. There’s a short trail around the lagoon to see the boiling and spouting hot springs around the Secret Lagoon pool. The Secret Lagoon has showers and change rooms. Entry is $A30.

Not far from the Secret Lagoon is the striking Kerid volcanic crater lake. The crater lake is thought to be once a cone volcano. After the last eruption, the cone collapsed and was later filled with water. The steep red volcanic rock walls contrast against the blue of the water and it’s a worthwhile photo stop on the way to the Secret Lagoon or the “Golden Circle” tour of the Gulfoss Waterfall, Geysir geothermal area and Thingvellir National Park.