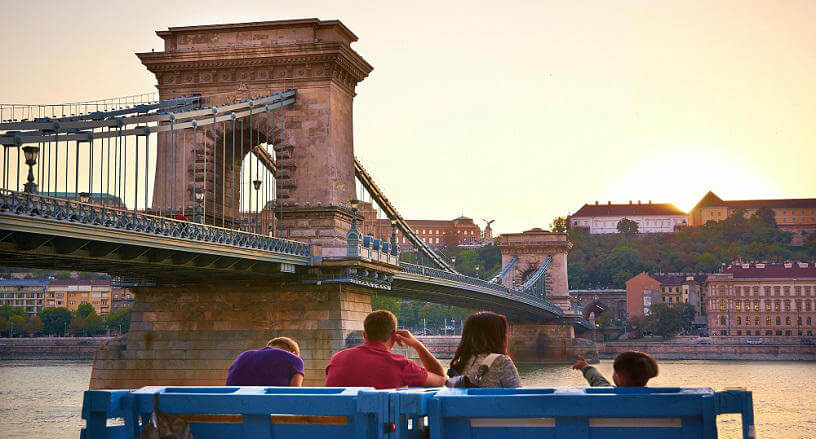 You might not have thought about Budapest, Hungary for your next getaway, but this European gem should not be overlooked. Straddling the Danube River, the breathtaking scenery of Budapest combined with the city’s draw-dropping shopping are sure to leave you hungry for Hungary.

Things to see and do

This city is blessed with an abundance of hot springs. As a result ‘taking the waters’ is a beloved Hungarian pastime. This practice dates back to the ancient Romans, but has been updated to provide modern conveniences. Near the northern end of Budapest’s City Park, Széchenyi Baths are the most-visited by tourists for several reasons: the vast size (Széchenyi offers 15 indoor pools and three outdoor pools), the bright, clean atmosphere, and the wonderful water temperatures (usually around 38°C). Baths are open to both men and women at all times and bathing suits are required (phew).

This is one royal palace that is not afraid of change. Budapest’s Royal Palace has been razed and rebuilt at least six times over the past 700 years. Today the Hungarian National Gallery is housed in four floors of this massive building and includes medieval and Renaissance stonework, Gothic wooden sculptures and baroque art. Also housed in this building is The Castle Museum, a part of the Budapest History Museum, gives a great look at the city’s long history.

One of the largest Jewish houses of worship in the world, Budapest’s Great Synagogue hosts a Jewish museum and a Holocaust Memorial Room. The architecture of this building is enough to make you stare for hours. The crown jewel of this synagogue is its Holocaust Memorial ‘tree of life’, which features inscriptions of many of the hundreds of thousands of victims that suffered during WWII.

Take a trip back to soviet-era Hungary when you visit Memento Park. While other countries of the former soviet era have chosen to remove propaganda statues from the time, Memento Park serves as a precautionary reminder to residents and tourists alike. The statues collected here are gigantic monuments of the communist dictatorship and once lined the streets of Budapest. See life as it once was in the adjoining soviet-era museum.

The high season in Hungary falls during the European summer (July to August). Summers in Hungary are often warm, sunny and long. Expect long queues at major attractions and high prices around the country. August is the cucumber-growing season, which means many city facilities grind to a halt. July is the optimal month to visit.