Why the South is the underrated gem of the US

The United States is a popular destination for travellers all over the world. One of the things I find most fascinating about the US is how different each state is from the other. Travelling through one state to the next can sometimes make you feel like you’re in another country, which is why I think America is a great place to visit time and time again. While many tourists tend to just hit the hotspots like Los Angeles, Las Vegas and New York, they often forget that there is a whole region down South that is just as exciting. As I got to live there for a little bit, the South will always hold a special place in my heart. Here’s why I think you’re next trip to the US should include the South, because this underrated gem is often overlooked on itineraries when it shouldn’t be.

I’ve travelled extensively across the US and it’s safe to say that Charleston in South Carolina is one of my favourite cities. I can’t quite describe what it feels like to walk around this beautiful place and see impressive sunsets light up the sky, but it’s something special. Charleston has its own charm and is defined by cobblestone streets, a great dining and shopping precinct and pastel antebellum houses. A walk down Rainbow Row will feel as if you’re transported back in time as you see the iconic and colourful Georgian row houses. Take a stroll down King Street for a bite to eat and some shopping, and then head to Waterfront Park for a view of the famous Ravenel Bridge and Pineapple Fountain. While I never got to make it there, a visit to Boone Hall Plantation is worthwhile, especially if you’re a fan of The Notebook (it was filmed as Allie’s Summer House). With the beauty and Southern charm that Charleston embodies, it’s no wonder why this is one of the most popular destinations for weddings in the US. 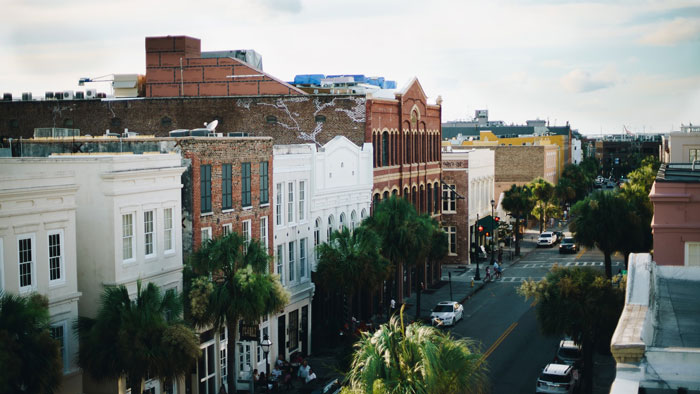 I fell in love with Savannah from the moment I saw it. It’s a stunning place to visit and is so rich with history. Walking underneath oak trees with Spanish moss draped along the branches sets a magical scene. Savannah is a city where you can soak in the atmosphere by strolling through the streets, rather than seeking out famous landmarks to look at. Let the city unfold before your eyes while exploring the Historic District, Forsyth Park and Cathedral of St. John the Baptist. You’ll be sure to come across Chippewa Square, which is known for the famous park bench scenes in the film Forrest Gump. While this may seem odd, I’d also recommend looking around the Bonaventure Cemetery because it’s beautiful in its own right. There is so much to appreciate about Savannah, so make it a part of your next holiday. What I adored about Nashville, aside from the fun vibes that filled the air, was the fact that a lot of the things I wanted to see were all close together. I did Nashville entirely on foot, as most of the main attractions are in walking distance from each other. It’s the kind of city where you can see a lot in a short amount of time. Some highlights in the city of music were the historic Ryman Auditorium, Grand Ole Opry, Country Music Hall of Fame and Museum and the Tennessee State House, where one US President is actually buried on the grounds. While I never got to check out Vanderbilt University, I have heard it’s worthwhile to go and see as well. Even if you don’t consider yourself to be a big country music fan, you’ll still be swept up in the atmosphere from the live music coming out of the Honky-Tonks that line the street. It’s impossible not to have fun in the home of country music. I’d go back to Nashville in a heartbeat because you’re guaranteed to have a good time. The Big Easy certainly draws in crowds of people each year and for good reason. I managed to see a lot in the short amount of time I had in New Orleans, as the good times kept rolling day and night. It is a lively American city with a French twist that acts as an adult playground. Let loose in Bourbon Street and revel in the magic of the French Quarter. Step inside St. Louis Cathedral and feel as if you’ve been transported to Europe and make sure to indulge in some world famous beignets at the Café du Monde. A trip to Louisiana wouldn’t be complete without a tour of the meandering bayous, where you can see wild alligators, boars, turtles and other swamp animals. This was definitely an amusing experience as we had boars splashing mud into the boat and all over us. New Orleans is certainly an electric city that will keep you entertained for hours, and should be on the travel itinerary of anyone wanting to have some good Ol’ Southern fun. Atlanta is an energetic city and because it’s rather large, you’ll find that a lot of attractions are quite spread out. I managed to visit Atlanta twice during the time I lived in South Carolina, and I’m glad I did otherwise I wouldn’t have been able to see everything. The Center for Civil and Human Rights is one of the best museums I’ve ever been too and I’d recommend going even if you aren’t a huge fan of museums. While you’re getting a dose of history, make sure to check out the Martin Luther King Jr. National Historic Sites, like his home and the Ebenezer Baptist Church of Atlanta. You’ll get to learn a lot about the Civil Rights Movement. What should also be on your list of things to do in Atlanta is the CNN Studio Tour, where you get a behind-the-scenes look at news and broadcasting in action. During your stay in the city, I’d also suggest visiting the Atlanta History Center, including Swan House and the Smith Family Farm. This experience lets you walk back in time and see what life was like in Atlanta during different time periods from the Civil War to the glamorous 1930s. I think that Texas is the epitome of Southern hospitality and during my time in Dallas I was blown away by how friendly the people were. This was my first real taste of Southern charm and from then on I was hooked. For anyone interested in some JFK history, then be sure to add Dallas to your list of places to visit. The Sixth Floor Museum/Texas School Book Depository at Dealey Plaza is fascinating to go through. Regardless of whether or not you’re a supporter, the George W. Bush Presidential Center also makes for an interesting visit. As it’s not that far out of Dallas, Fort Worth Stockyards National Historic District is worth exploring as well because it gives you a glimpse into life as a cowboy, with cattle drives, rodeos and deep-fried catfish. A trip to Fort Worth wouldn’t be complete without venturing inside Billy Bob’s Texas, the world’s largest Honky-Tonk, where you can eat, drink and two-step the night away. Amanda Earl is an Australian-based media and marketing professional who is constantly daydreaming about the next destination to jet off to. She’s always looking to explore new cultures and see parts of the world she hasn’t experienced before. Follow her on Instagram @amandaearl26 to keep up with her latest adventures.

All photographs in this blog were taken by Rebecca Earl.